If you are a die-hard fan of the Anime series, you will be unable to overlook the Anime shoes designed to reflect each character's personality. These Chainsaw Man Shoes can help you create a distinctive and attractive appearance. Chainsaw Man has gotten a lot of praise and favourable reaction from readers and the media since its publication because of its original tale and innovative character construction. Chainsaw Man Shoes was influenced by the design of the characters in the series. Each figure draws inspiration from a different source. Furthermore, the shoes are sought after by young people, particularly fans of the series, due to their trendy and unique designs. 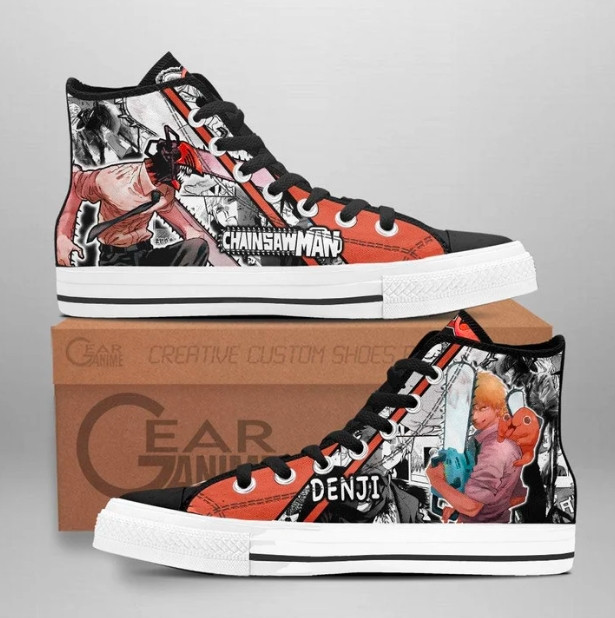 Chainsaw Man is the newest shonen manga sensation, with fantastic characters adding to its appeal. Chainsaw Man, which ended its first run last year, has quickly established itself as one of Shonen Jump's most well-liked and critically praised series.

The collection's ambition and charismatic characters account for a large part of its success. Chainsaw Man contains a lot of characters, especially for a manga that has only completed its first section. The viewer is exposed to not just the countless Public Safety Devil Hunters, but also the vast number of people, both devilish and human, who are working against them. Each character in the series brings their own distinct design ideas to the table. As a result, each design in the Chainsaw Man Shoes collection this time has its own colour, making it easier for buyers to choose the most suitable solutions.

The protagonist of the Chainsaw Man manga series is Denji. He inherits his father's Yakuza debts when he is a young lad. For Uta enthusiasts, Denji personalized shoes are thoughtfully created and meaningful gifts. These sneakers let you look more modern and lively by using basic black and white as the major colours. We offer made-to-order things that are customised or unique. You can have an item customised or made-to-order.

Makima is a powerful Demon Hunter who has taken Denji in as a pet. Makima is subsequently revealed to be the Demon of Control, the personification of control's fear. In the Public Safety Saga, she is the major adversary.

This character is the inspiration for Makima’s handmade shoes. This design's colour and style originality make you appear cooler and more trendy. As a result, young people have been clamouring for these shoes since they first appeared on the market.

Aki Hayakawa, as one of the coolest characters in the Chainsaw Man series, created an indelible effect on fans. Customers in outdoor activities prefer Aki Hayakawa bespoke shoes because of their simple and small design. Fashion and original design also contribute to a youthful and vibrant appearance.

Last but not least, we have Power Shoes. These sneakers are praised for their great quality as well as their unique style. This design gives the wearer a contemporary and fashionable appearance.

Is Chainsaw Man getting an anime?

It was revealed on December 14th, 2020, that Chainsaw Man would be adapted into an anime. The anime is produced by MAPPA, a famed animation company that has previously worked on blockbusters including Attack On Titan's last season, Jujutsu Kaisen, and Zombie Land Saga.

Did Chainsaw Man get Cancelled?

The series was awarded the prestigious Shogakukan Manga Awards for Best Shnen Manga in 2021.

Is Chainsaw Man a horror anime?

Yes. The Chainsaw Man anime adaptation has been a hotly anticipated release for 2021/2022 since its official trailer in June. The series is sure to be a smash with horror fans, with whirling chainsaws and legions of devils.

The following is everything you need to know about the Chainsaw Man anime, including the plot, characters, manga status, and release date. A young boy named Denji must pay off a massive debt left by his deceased father in a world where devils form from human worries.

What is Chainsaw Man called?

Readers were left with a lot of perceptions and feelings after seeing Chainsaw Man. The Chainsaw Man Shoes collection was also a major hit in the fashion business as a result of its success.