Anime shoes are one of the most popular styles, with a big following among young people. We frequently think of eye-catching, unusual, and fresh images, textures, and colours when we think of anime shoes. These design concepts not only reflect the author's fashion sense, but also his enthusiasm for the world of anime. Every character, image, costume, or detail in the Anime series serves as a new source of inspiration for us to create one-of-a-kind things. Gearanime.com is constantly updated with fresh concepts that allow you to display both your personal impression and your interests. One collection that brings fresh and innovative ideas is Code Geass Shoes. The imagery and characteristics of the individuals in the story directly influenced the objects in this collection. Our design team gets new ideas from each character. Whatever fashion style you prefer, you will find the correct items in our selection. 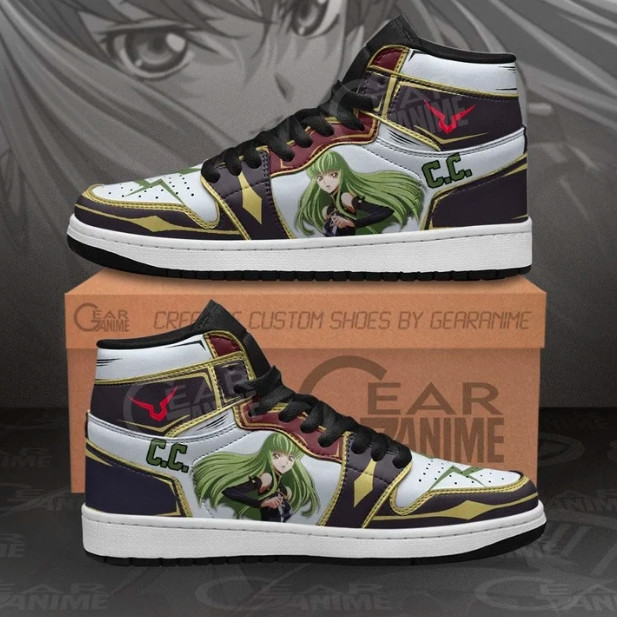 Code Geass is a story about revenge, tyranny, and exploitation, as well as the psychological battles of the protagonists, told in a dark and gritty style. An anime series is thought to feature a variety of genres, yet each genre is presented in a unique way.

These Custom Code Geass Shoes are both beautiful and comfy. These special designs are perfect for every day that will make you satisfied every time you put them on! Comfort and impact protection is provided by a high-quality rubber sole that provides traction and great durability. Our talented otaku designers created all of the items in this collection. To ensure that you receive a legitimate item, make sure you purchase through the official Gearanime website.

The creative design of Lelouch vi Britannia Shoes impresses. The shoes, which were inspired by the same-named character in the Code Geass series, have become one of the most popular items. Young man Lelouch vi Britannia makes an impression on readers that lasts a long time. These custom shoes are predominantly black and strongly feature Lelouch vi Britannia's image. Furthermore, these shoes, specifically Jordan shoes, are designed in modern and trendy styles. Customers have given these shoes great feedback and reviews.

Because of his striking appearance, Suzaku Kururugi sticks out more than any other character in the novel. His normal attire consists of black with blue and white stripes. Gearanime. com's Suzaku Kururugi Sneakers Custom Anime Code Geass Shoes were also inspired by this. The odd colour scheme used by Suzaku Kururugi served as the inspiration for these shoes, which are black with a blue and white line pattern. These items have become one of the best-selling items as a result of this inventive and stylish combination.

C.C is one of the characters in the popular hit anime Code Geass who gets the most emotional emotions from viewers. This character may be argued to be the most appealing aspect of the entire plot. Furthermore, the author is incredibly generous when it comes to providing this character with an attractive appearance. The design of C.C. Shoes is simple, with white as the dominating colour to emphasise the character's image. C.C. Shoes is one of the most popular collections on Gearanime.com.

Kallen Kouzuki is a favourite and unique character in the Geass anime. She is also considered one of the 15 most beautiful female characters in the anime world in general. Kallen's expression is shown in many differences. From appearance to personality, this character is impressed by the character. It can be said that she is the most favoured character throughout the series. A beautiful image like Kallen is the topic as well as the inspiration of many designers. Gearanaime's design team cannot ignore this beauty. We have exclusively designed the style of anime shoes and the imprint of the character Kallen. These innovative designs are named Kallen Kouzuki Shoes. And not too surprising when Kallen Kouzuki Shoes became the most searched keyword on our website right after these items were released. Visit our official website to own the unique and latest designs of Kallen Kouzuki Shoes. I firmly believe these items willisfy you at first sight.

Is Code Geass the best anime ever?

Code Geass is an anime that you will never tire of watching. This anime has an unrivalled fragrance of attraction. This is a tactical action anime that won't waste your time. People who don't watch it for the art are stupid; they're missing out on a lot of mystery and fun. If you look closely, you'll notice that they tweaked each character in such a way that they blossomed into something lovely.

Does Code Geass have a season 3?

No trailer has been made available as of yet. However, it appears like a third season will not be produced. The biggest issue is that the program has been on hiatus for over a decade and there has still been no word regarding a third season. Having said that, we heard speculations in July 2020 that a new Code Geass anime project is in the works!

How should I watch the Code Geass series?

There is just a handful of series that have the same impact as Code Geass. It's no surprise that there's so much Code Geass to discover, given the amount of action, tension, and politics throughout the series. If you're interested in watching the Code Geass series, we've outlined the optimal Code Geass watch order below.

Is Code Geass good for beginners?

While the quality of the second season does drop, Code Geass should be one of the first shows on your list to see because it does so many things well practically all of the time. It's able to operate as an Anime 101 for practically everyone by expertly combining horror, political intrigue, and some slice-of-life drama.

If you're an Otaku in general or a Code Geass fan in particular, Code Geass sneakers will be a must-have in your wardrobe. In particular, when attending the Code Geass convention where you can dress as your preferred character and flaunt your sense of style by donning Code Geass footwear.