Gearanime offers an entire collection of  Anime shoes that are inspired by the image and personality of each character. High School DxD remains one of the most famous and cherished anime series despite being released more than ten years ago. Because of this, High School DxD Shoes have established themselves as among the best anime shoe designs. People quickly think of High School DxD when discussing its appealing and sensible material for youngsters. In addition, readers are strongly affected by how the story's characters are shaped. The story's protagonists are all distinctively formed, colourful, and diverse, serving as a source of design inspiration in the fashion world. DxD High School Shoes are a good illustration of this. These shoes are appreciated for their quality and considered a spiritual gift for those who love Anime in general or this series in particular. 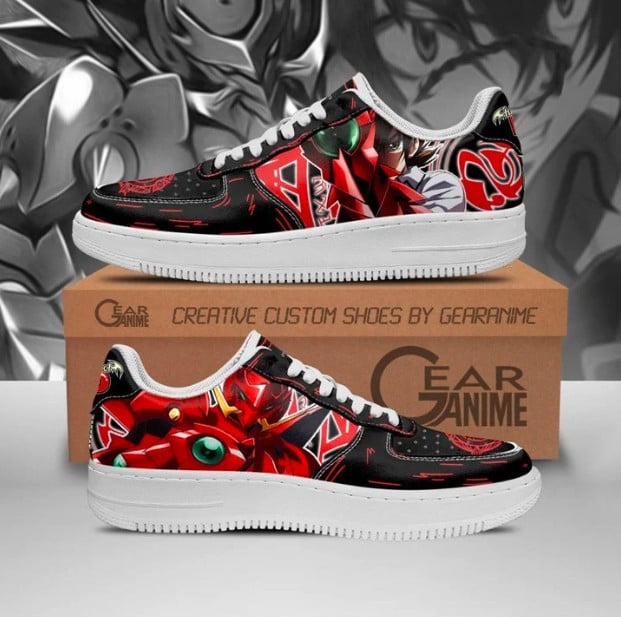 This series has a sizable fan base because of the interesting and significant material and original character creation. Young people, especially fans of this series, are therefore drawn to High School DxD Shoes that are modelled after the appearance and personality of each character. Quality and fashionable style are the two key reasons why people like these shoes. The shoes are made in a trendy, modern style to help you create a sophisticated and upbeat appearance. Additionally, those shoes' wonderful and soft materials aid in protecting your feet all day.

Issei is one of many Ddraig's pets, also known as the Welsh Dragon (rhymes with and translated as "Welsh Dragon"). We cannot forget the character Issei from the well-known popular show High School DxD. Despite having a dapper and cool exterior, he possesses a very complex personality. Issei is arguably one of the characters who stir readers' emotions the most. Simple white is used as the main colour in the design of Issei’s custom shoes to draw attention to the image of Issei imprinted on the footwear. Additionally, these shoes are simple to wear with regular clothes. This benefit brings this design closer to the target market.

One of the key characters in High School DxD is Rias Gremory, who also happens to be Issei Hyouudau's main love interest. The readers' hearts have been left with numerous enduring memories of this figure. She typically wears black and white outfits and has striking blonde hair. This character serves as the basis for Rias Gremory's unique footwear. Because of this, Gearanime.com decided to make the primary colors of this design black and yellow. Additionally conspicuously placed on the plain background is a picture of Rias Gremory. This can be one of the High School DxD Shoes styles that people love the most.

One of the many female leads in the anime High School DxD is Asia Argento. Issei met a lovely nun who has a very kind heart while she was in town.
Asia Argento is a strong-willed girl with charisma. She is shown in the series as having a very powerful and vivacious image. She is one of the protagonist's most useful helpers. One benefit that can help her win over more fans is a stunning face. Detail by Asia Argento, from colour to style. These sneakers have a lot of vitality, much like the other designs in the lineup, giving you a youthful and energizing appearance.

Speaking of Akeno, while at first glance she may appear to be quite sweet and soft, her true nature is one of severe cruelty. She is a genuine bad girl and highly seductive. She particularly enjoys teasing and tormenting adversaries.

Don't overlook Akeno Himejima shoes if you're looking for a pair of shoes with a straightforward yet stylish design that will give you a youthful appearance for a variety of occasions. Being created of comfy, flexible materials that keep your feet protected all day, whether you're outside or not.

We all know that High School DxD is a classic anime work with a sizable fan following, which is why Koneko Toujou shoes are so well-known and well-known in the fashion business. As a result, when High School DxD shoes were introduced, they were highly appreciated by customers. Among them, we must call attention to the Koneko Toujou shoes, a style that offers a fashion trend a fresh perspective. This design features a dynamic layout, and careful attention to detail has elevated it to the top of the charts.

One of the male leads in High School DxD is Yuuto Kiba. He is the school's popular pretty boy who is adored by many female students and despised by other male students. He is a third-year high school student at Kuoh Academy in Class 3B. These Yuuto Kiba shoes swiftly rose to the top of the most popular items at GearAnime despite having a straightforward design that is nonetheless really exclusive and fashionable. In addition, this design is cherished for both its usability and convenience. They'll be thoroughly blended with numerous styles.

Does High School DxD have 18+?

Ichiei Ishibumi and Miyama-light Zero's novels of the same name were adapted into the anime series High School DxD. The plot centres on the exploits of Issei Hyodo and is set during the conflict between angels, fallen angels, and devils. Issei, a high school student who is perverted, gets murdered by his first date, who turns out to be a fallen angel. Rias Gremory, a red-haired school beauty who is a devil and becomes her servant, revives him.

Yes, High School DxD Hero has been censored—at least temporarily. You can notice how heavily the anime is edited if you've watched the first episode of High School DxD Hero. The only live-streaming uncensored versions of anime are those from AT-X in Japan and illicit streams.

High School DxD season 4 is currently being blocked with inconvenient ads and light bars. The experience of watching is ruined. I'm not sure what the problem is with season 4, given seasons 1-3 are not censored. I pretty much only have this one show on Hulu right now.

What does DxD mean?

I've been reading the manga and anime for High School DxD. But so far, no one has clarified what the acronym DxD in the title signifies. The one I'm most eager to battle. The Great-Red Apocalypse Dragon, often known as [DxD], Dragon of Dragon. "The True God-Emperor of White-Dragon" is what I aspire to be. If there is an ultimate class for "Red," it won't seem good if the "white" is a rank below it, right? I shall become one because of this.