A comprehensive selection of anime shoes that are modeled after each character's appearance and attitude are available from GearAnime. One of them is a pair of Mushoku Tensei Shoes, which give you a distinctive, fashionable appearance. Mushoku Tensei is a manga series that continues to get support from readers even after many years since its release. Mushoku Tensei's eye-catching and distinctively designed characters have helped the brand gain a sizable fan base and support. The shoes are designed with the style and shape of each character in mind, introducing young people to cutting-edge fashion trends. The quality of these designs is also a strong selling feature for companies. 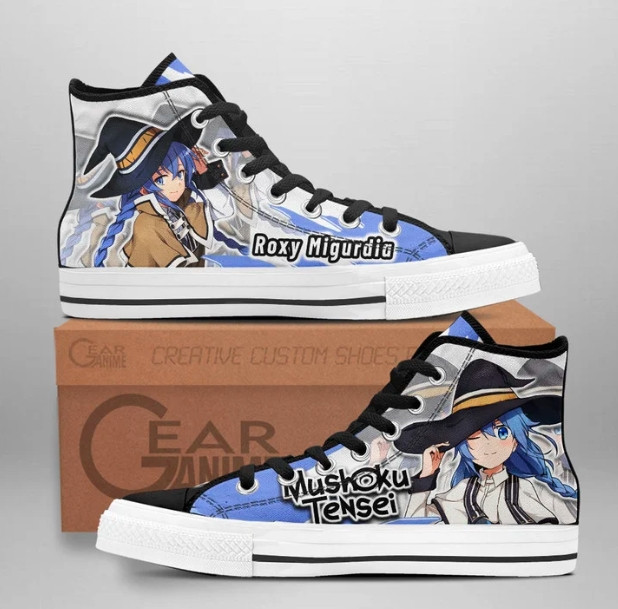 A young man without a job or hope who gets expelled is the subject of the Japanese web book series Mushoku Tensei, authored by Rifujin na Magonote and published on the Shsetsuka ni Nar website (also known as Syosetu). A sudden accident caused him to pass away and be reincarnated into a fantasy realm, where he chose to live a serious and colorful life this time. He left the house just in time for his parents' funeral.

We can never forget the picture of Rudeus Greyrat, a man with a strong and attractive appearance, when we think of Mushoku Tensei Shoes. The guy frequently shows up wearing a vibrant yellow attire. Gearanime.com used this as inspiration while creating the Rudeus Greyrat shoes. The shoes use Rudeus Greyrat's likeness and mostly use the colors blue and yellow. It may be mentioned that this design will make a special present for Rudeus Greyrat admirers.

The character Roxy Migurdia makes a big effect on the audience. The guy is taken aback by his distinctive shape. He frequently sports a purple suit and blonde hair. Through these graphics, Roxy Migurdia's likeness is authentically depicted. By using purple and yellow as the primary colors, Roxy Migurdia's image becomes more recognizable to the audience. Additionally, the dynamic design offers you a fresh look.

The Sylphiette bespoke shoe design is most likely the sought-after style in the Mushoku Tensei Shoes collection. Sylphiette's followers go absolutely crazy for this design, which features the popular color purple as its predominant hue. Additionally, the checkered pattern adds to the appeal of this design. The wearer of these sneakers sports a contemporary, athletic appearance.

Eris Boreas Greyrat shoes, one of the most well-liked styles in Mushoku Tensei Shoes, give the wearer originality and inventiveness. Customers are left with a lot of impressions from this design, which uses the color blue and the checkerboard pattern as its main themes.

Is Mushoku Tensei season 2 out?

Will Mushoku Tensei have 3 seasons?

The anime series Mushoku Tensei is well-known and has performed exceptionally well this year. Enthusiastic viewers started making plans for the following season. The precise release date for Jobless Reincarnation Season 3 is unknown to many spectators. Here is all the information you require for the newest anime series. Even more action-packed than the previous season will be the following one. It was greatly anticipated. Let's get going!

A lot of people have praised Mushoku Tensei's good art and soundtrack, and those who have read the online book believe it is a fantastic tale of a despicable person becoming a decent man. It has a relatively high rating on Mal. On the other hand, despite the high average score, many negative reviews give it a low rating, and I have heard many people describe it as meaningless self-insert pedo rubbish.

Is Mushoku Tensei available on Netflix?

Only in a few nations, like Japan, is Mushoku Tensei: Jobless Reincarnation: Season 1 (2021) accessible on Netflix. This implies that due to geo-restrictions, if you live in the US, you cannot view this series on Netflix. A VPN is needed in this situation.

Mushoku Tensei  Shoes are new designs offering diverse styles. Besides, these shoes are also focused on output quality. Therefore, this collection has become one of Gearanime's most successful collections. Mushoku Tensei Shoes will bring you a trendy and fancy look when attending any events related to Anime, especially the Mushoku Tensei convention.